The video of our 2007 field season is up and on Youtube. Enjoy!
Posted by Maltese at 6:56 AM No comments: 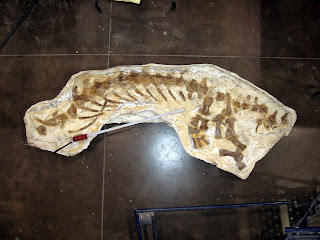 Back to the exciting marine reptiles! This week is "Ono", a very large but headles Platecarpus ictericus that was recovered in 2006. Surprisingly, Ono is not named in honor of the wife of a former Beatle. Here's the story:
Our field crew had just left an area called "The Forbidden zone" because our owner, Mike Triebold, had decided we had found too many specimens in that small spot. This sometimes happens in the Niobrara. We instead headed to the nearest outcrops, about 200 yards to the east. While still 25 yards away, Mike tossed his pick to the ground and exclaimed "Oh no, not another mosasaur!" As we approached closer we could see the sides of 6-8 dorsal vertebrae exposed on the outcrop surface. Back in the lab we prepared the specimen and remarked at the articulated ribs, as well as probable cartilage in between the ischia (pelvic bones).
Ono is a very strange case, as headless articulated torsos are nearly unheard of in the chalk. This mystery made us do some "digging" ont he internet, and we discovered that we were working not far from Cope's 1871 expedition camp site. There is a possibility that the missing skull may have been collected 130 years prior!
Posted by Maltese at 11:09 AM No comments: 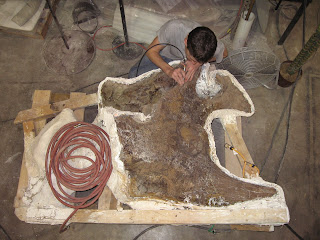 Back on the dinosaur side of things, we're working on a very large Triceratops skull. This unnamed skull was discovered in 1999 by Mike Triebold in Harding County, SD, and has been taking up a lot of room in storage ever since. We opened the jacket at the end of March and have been working at it in small increments ever since. There is a large area of ironstone concretion on this, the down side, making preparation difficult and time consuming. Once cleaned and stabilized, we'll rotate the jacket upright and work on the other side, hoping to have a 3d skull mounted in a few months. As you can see, it is missing its beak, lower jaws and a portion of frill. These items will be restored later with plastic and epoxy putty.
The interesting things about this skull is the morphology preserved. It has a relatively large nasal horn, yet short and fat browhorns. There is a high degree of variation known in Triceratops, primarily because there are more skulls known than skeletons. In fact, Triceratops skulls are among the most common dinosaur fossils discovered in the Hell Creek Formation. This is the exact opposite of how we find other dinosaurs.
Posted by Maltese at 12:24 PM No comments: 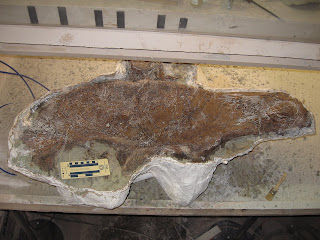 Preparation is going strong on some of the larger jackets, which has the added benefit of freeing up space in the lab for other things! Here's the left ilium, with a total length of 1115mm. The bone is still very soft and fragmented. The only really well preserved parts tend to be the toes and legs. The object to the top of the jacket is a cervical vertebra, which we will separate from the ilium once this side is prepared and we can rejacket and roll the bones. Then it will be restoration (primarily crack filling) and molding time, which can be very challenging.
These larger jackets are chock full of surprises. Due to the softness of the matrix and bone we were not able to fully excavate or identify the individual elements in the blocks. Now in the lab we are finding that this dinosaur is much more complete than we originally believed.
Posted by Maltese at 10:46 AM 2 comments: 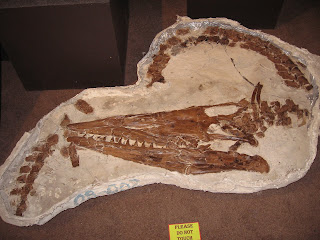 For our inaugural installment I present to you RMDRC 08-002, a Tylosaurus nepaeolicus specimen that was discovered in May of 2008 by John Bennitt in Gove County, KS. Lower jaw length is 757mm, for those of you keeping score. This was found on a private ranch where our company has been scouting for nearly 25 years. Because the Niobrara Chalk erodes so readily, the entire outcrop must be scouted every 2-5 years. In fact, this specimen was discovered less than 100 feet from a tiny Clidastes skull that I found 2 seasons prior.
Since this is an articulated specimen, not much else will be done to it. Taking it apart for a 3-D mount risks too much damage to the skull, and articulated chalk specimens tend to have a lot of distortion from being smashed flat. In any case, there are plenty of cool things about this critter that re already shown. If you look closely at the neural spines of the anterior dorsal vertebrae, you'll notice a nice arc of missing bone. Click on the image for a larger view if jacket 1 of 3. This is a bite mark attributed to the shark Cretoxyrhina mantelli, whose shed teeth were also found lodged in Tracie. There appears to be a little preserved skin in both the left dorsal and lateral temporal openings, and the sclerotic ring of the eye is still in place. The cervical, dorsal and pygal vertebral series are complete, however the limbs and much of the tail appear to have been forcibly removed from the animal, hopefully after it died. This specimen is currently off exhibit due to Darwin and Dinosaurs, however it will return on display in July.
Posted by Maltese at 8:38 AM 2 comments: 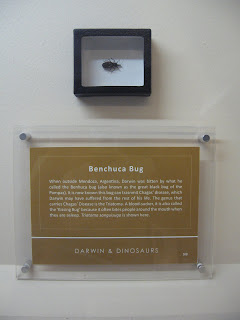 I can't give too much of the exhibit away. It would cheat everyone that is making the trek up to Woodland Park for our lecture and grand unveiling. However, to show you the depth of the coverage of Darwin, we have a specimen of the type of bug that bit him on his voyage on the Beagle.
We are expecting snow overnight and tomorrow morning, so please check with the RMDRC website after 4pm to make sure things are still happening as scheduled. If not, there will be an alternate date decided and posted then, however it looks like the storm will blow through early enough to allow the roads (and our parking lot) to be cleared in plenty of time.
Posted by Maltese at 4:55 PM No comments:

Darwin and Dinosaurs: The Preview 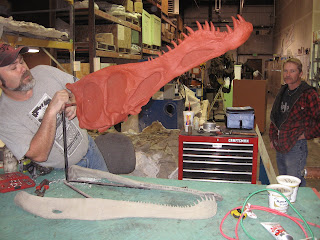 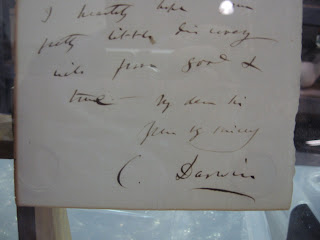 We are extremely busy getting ready for the Saturday opening of "Darwin and Dinosaurs". Dr. John Van Whye will be speaking across the street at the Ute Pass Cultural Center, then the whole party moves to the RMDRC for refresments and the exhibit unveiling. We will also have the debut of a few cast specimens from the British Museum of Natural History as part of the display. Part of our spiel from the RMDRC website about the new exhibit:
"These Darwin materials are part of a private collection and have never been on public display before.   The collection is valued at well over $1,000,000.

The exhibit will include original Darwin letters, books, maps, and artifacts.  A scale model of “The Beagle” will also be on display.  The exhibit will run through July 5."

A special bonus for our lucky blog readers is a behind the scenes look at the work going on to ready these documents and items for the exhibit. More updates as the opening approaches
Posted by Maltese at 6:57 AM No comments: