I really hope everyone got a chance to see the River Monsters season finale. Here's a teaser of Jeremy Wade Sharing a bit of what he had learned with us in the field digging up a Xiphactinus audax skeleton.


One of the things he alludes to has a funny backstory. When we first arrived at the site, the film crew's rental minivans couldn't get near where all the equipment needed to be. Not a huge problem, we transferred it to the bed of the bosses truck and away went the gear and most of the crew. I had been riding in vehicles way too much already that morning and decided I'd walk the easy 1/4 mile or so left to the site. Jeremy, the director and an assistant decided this was a good idea as well, so I was able to show them some things in the chalk on the way up. Mostly clams. Lots and lots of clams.
Arriving near the digsite site, literally within 4 feet of where the boss parked the truck, while talking to Jeremy about how you have to be in the right place at the right time to find a specimen, I look down and see the face of a newly eroding Xiphactinus specimen poking out of the rock. I COULD NOT HAVE PLANNED IT BETTER. It's really not all that great, but our guests had never seen the discovery of a fossil before, and they seemed pretty thrilled about it. Happy I could oblige.
Back in the lab the next day we worked hard to begin the prep on the Xiphactinus specimen RMDRC 14-012, which we nicknamed "Jeremy". Unfortunately, all of that seems to have ended up on the cutting room floor.
Nevertheless, we went ahead and finished prep on "Jeremy". Not the prettiest one, and for the life of me I can't figure out how the face was nicely articulated but the entire braincase was spun off and away. Them's the breaks I guess. As for working with the River Monsters crew again? Name the time and place, they were superb.

Posted by Maltese at 3:11 PM No comments:

See us on River Monsters this Monday! 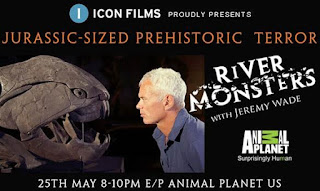 I can't reveal too much until the air date, but I can now share that you'll be able to see Jacob, Mike and myself on the season finale episode of "River Monsters" starring Jeremy Wade!
Jeremy came out to the field with us recently, then visited the museum, film crew in tow, to experience a fish dig in Kansas and what we do with the fossils once they return to the lab. It was a busy but fun couple of days with him and the crew from Icon Films. Hopefully what airs on Animal Planet features my good side!

Posted by Maltese at 7:53 AM No comments:

It seems like nearly every year a new book, film, or television program comes out featuring the long-dead seaway that covered most of the central part of North America back in the late Cretaceous. Invariably they have cameos featuring Xiphactinus, Cretoxyrhina, Protosphyraena, and even the "bait fish" Gillicus and Enchodus. They have mosasaurs, pterosaurs and even sea turtles. If you didn't follow the science closely, you'd understandably figure that's about all that lived in that shallow sea.

Truth be told, there were probably a few hundred types of fish in that seaway. Dr. Kenshu Shimada made a decent attempt to catalog all of them a few years ago, but like all good science on the Niobrara, it was getting out of date almost as soon as it was published. It's really amazing that 120 years after collecting work began in Western Kansas, new critters are still being found. I'm not going to go into details on them (I'll save them for other blog posts) and instead focus on this fish that is criminally underrepresented in the literature and online.

If it's Wikipedia entry were any indication of its importance, what does the text containing a whopping total of 89 words tell you? That's right, 89 whole words, some of which are even talking about other related fish. Lame.

Ichthyodectes, a fish with moderately terrifying teeth and with a body length approaching 9 feet, it's not cheered on much. Sure it's pretty common in the Niobrara, but it's also basically a pocket Xiphactinus (see, using the Wikipedia trick of talking about it's cooler cousin to gin up some interest). An average scouting season for us will find 5 or so specimens identified through cranial material. Probably more, but postcranially all ichthyodectids of about the same size pretty much look identical.


Perhaps a big reason as to why Ichthyodectes gets so little love is that there are so few specimens on display in museums, even fewer ones that look, um, not silly. Perhaps we need more museums to decide that decent specimens of lesser known fossil fish of the Niobrara are just as important for display as mosasaurs or sharks or Xiphactinus. Maybe I'm just asking for too much. In any case, I've pretty much doubled the amount of useful Ichthyodectes pics on the interwebs, so I'll count it as a win.

Posted by Maltese at 3:01 PM No comments: