Sorry it's been so long since the last blog post. Strange combination of field work and Chrome barfing the interface with Blogger on my end. Got it fixed now though. Hopefully.

We went out last week on our first collection trip in the Niobrara Chalk of western Kansas last week, and had some great success. We went out with a class from the University of Tennessee Martin, and the students were a great help in covering outcrops that we hadn't looked at for a few years. The first recoverable item was found before the students had even arrived: a partial large Saurodon leanus skull, RMDRC 11-020. It was collected on a small knob really close to the surface with a plant on top. Roots did a number on it, but it is restorable as a plaque mount.

The second day of scouting with the whole compliment of people resulted in one of the students discovering a mosasaur skull, neck and partial torso coming out snout first of an outcrop low in the chalk (around MU 5), RMDRC 11-001. It looks to be a specimen of Platecarpus planifrons, with what appeared in the field as possible intraspecific bite marks across the snout. Ouch.

The next day we shifted over a section to the east and hit some outcrops that I had never scouted. The student that found the mosasaur managed to find a decent nearly complete Cimolichthys nepaholica, RMDRC 11-004, and not 30 yards away, an extremely large (9 foot long) Ichthyodectes ctenodon, RMDRC 11-018. Both animals were recovered. The Cimolichthys will be used in our 3D restoration project (which is ongoing) and the Ichthyodectes will be used to enhance our current 3D cast.

The best part about it was that I was able to collect a few specimens for my pet research projects, including some Spinaptychus jaws, RMDRC 11-005-007 and a partial Martinichthys brevis skull, RMDRC 11-003. These rare little fish only appear to occur between MU 4 and MU 6 in the chalk, and material is pretty scarce, including skulls. Hooray for more data points! 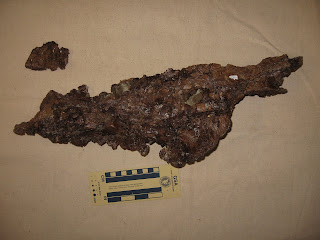 Sometimes a bit of exploratory prep shows everything in the jacket. Sometimes there is more fun stuff buried deeper. We came across UTC's syncervical the other day. Sorta smooshed but still more or less recognizable. Hooray!
Posted by Maltese at 3:40 PM No comments: