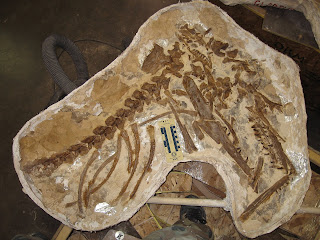 We have a new addition to the RMDRC mosasaur family: a Platecarpus ictericus from the upper Niobrara Chalk of Logan County, KS. I discovered this one on June 17th, but we didn't return to excavate till the 19th.
It appears to be a complete skull and cervical series, with a number of articulated dorsal vertebrae and ribs. The skull is scattered, but preserves not only all of the bones, but also calcified cartilage. This specimen is a great candidate for further preparation and 3d
mounting. Judging by the size of the lower jaws (18 inches) the complete animal would probably be 18 feet long. Unfortunately, scavenging sharks (probably Squalicorax kaupi, however a Cretoxyrhina mantelli tooth was also found on the same outcrop, rare in the upper chalk) forcibly removed the front limbs from Bev before she hit the bottom of the Western Interior Seaway 83 million years ago. 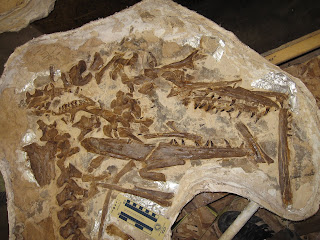 You may notice that we give nicknames to the specimens, and there is a great reason why. This mosasaur was discovered about 30 feet away from (and 15 minutes after) another Platecarpus specimen on the same outcrop. Instead of referring to them a "you know, the first mosasaur that Jacob found that week", we name them to keep them straight, both in the field and the lab.
The person that discovers the specimen gets the naming rights. In this case Bev is named after my mother. It's a great way of discovering which relatives like you best.
Posted by Maltese at 7:44 AM No comments:

Fun in the chalk 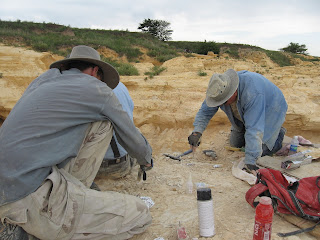 It was a good trip...
We only got 2 days of scouting in before getting rained out of the field on Saturday, however we found some good new specimens. Jacob Jett was able to find his first mosasaur, a >Platecarpus specimen in the upper chalk of Logan County. I stumbled upon another mosasaur, >Platecarpus ictericus, about 30 feet further down the same gully, and elsewhere on the same private ranch I discovered the hips of a large diving bird, >Hesperornis.
Thursday we spent the day excavating a giant fish with Mike Everhart, currently identified as Protosphyraena gladius, however that seems likely to change in the next few years. It was extremely hot and humid, with the temperature at 7:00pm at 103 degrees. The photograph shows Mike Everhart, Jacob Jett and a little bit of Mike Triebold at the excavation site.
Friday and Saturday were spent excavating the >Platecarpus specimens, and all the fossils made it safely back to our lab. Be sure to stop by in the next month to watch us prepare these critters and more in our lab viewing area.
Posted by Maltese at 8:33 AM No comments:

Off to the field!

No fossil of the week this time, our field crew will be headed off to the Niobrara Chalk in western Kansas bright and early Wednesday morning to investigate and recover more sea critters. I'll be taking lots of photographs so you can all see who's there and what we do, even some of the stuff we don't tell you about on our tours of the RMDRC.
Currently in the ground we have a small shark (probably Squalicorax falcatus), a small (12 foot) Xiphactinus audax, and a gigantic (18 foot plus) Xiphactinus that was partially poached from the rancher's property. Also, we'll be investigating a giant clam, Platyceramus, in hopes of putting it on display in our marine hall this summer. And who knows just what we may stumble upon once we start scouting!
Posted by Maltese at 4:59 PM No comments: 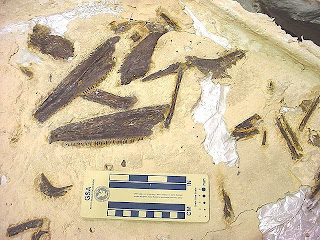 Let's talk big fish this week!
Ichthyodectid fish are amongst the most common fish found in the Niobrara chalk. The genera Prosaurodon, Saurodon, Saurocephalus, Gillicus, Ichthyodectes and the giant Xiphactinus are all found at various stratigraphic levels. Fish have very delicate skulls, however many times they are recovered articulated. It is impossible to disassemble these skulls without damaging them, so we usually prepare them in profile view. Sometimes they are disarticluated, looking like they reenacted the final scene from "Jaws 3D". These scattered skulls enable us to reassemble the pieces and take out some of the crushing distortion from 82-86 million years of burial.
The photo is of a specimen of Saurodon leanus named "Tony" that I discovered in Logan County, Kansas in October of 2006. Stratigraphically we're at about marker unit 18, so fairly high in the chalk, nearing the Pierre Shale contact. This is one of the more rare fish in the chalk, caricterized by it's long eel-like body and distinctive chin spike. As you can see, the bones of the skull have blown all apart, making this specimen a great candidate for molding and 3d reconstruction. No one is quite sure what the spike is used for, my guess is probing into the bottom muds of the western interior seaway looking for soft bodied invertebrates (such as worms) to eat. Hopefully we'll find more specimens in the future that may include stomach contents.
Posted by Maltese at 10:18 AM 2 comments: