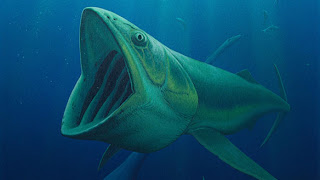 Just to toot our own horn.
There is a new name for the giant fish formerly known as Protosphyraena gladius. This fish has been known since the 1870s int he Niobrara Chalk, and Cope himself in 1875 had described the pectoral fins of (then) "Portheus" gladius as a "formidable weapon, and could readily be used to split wood in the fossilized condition". We here at the RMDRC do not condone the use of fossil fish fins for wood splitting.
The article covers two specimens, one that we prepared here in 2008, the other that we assisted Mike Everhart in collecting and are still working on.
The work showed that this fish, though related to the cretaceous swordfish analogue Protosphyraena perniciosa, was in fact a planktivorous filter feeder, much like modern whale sharks and manta rays. This type of feeding behavior was not yet reported for animals in the western interior seaway, and is pretty exciting, especially for an animal with a complete lack of sharp pointy teeth.
We are currently working on the first 3d reconstruction made from casts of the specimens in our collection. Keep checking back for progress! Painting at top Copyright Robert Nicholls, used in our paper.
Posted by Maltese at 1:51 PM No comments: 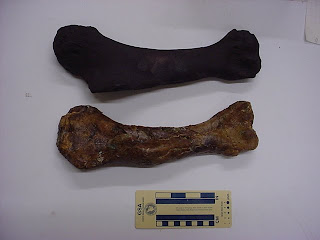 One of Pete 3's humerus compared to a cast of Peck's Rex. The other humerus is awiting removal from the main jacket.
Posted by Maltese at 3:36 PM No comments:

Pete 3 is rolling along in prep, with 5 jackets finished in the past week (to be fair, 2 of them were 95% done when we shelved the project last May). I'm working through the dorsal ribs and gastralia (belly ribs), because they're quick and easy and usually the last thing anyone wants to work on. The rib head below was finished yesterday, part of the material we had to pull off of the 4-ton jacket early in the prep process. The remainder of the shaft is still on the to-be-prepared shelves, but I hope to get to it very soon. Man, this Daspletosaurus was big. 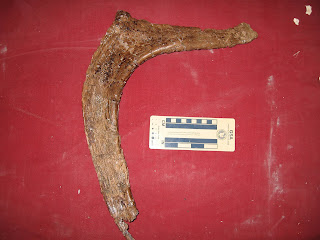