We've added another flying critter to our family of casts. This time it's a restoration of a female Nyctosaurus gracilis. This is the smaller of the two flying reptiles found in the Niobrara Chalk of western Kansas, and by far the most rare. Contact me if you're interested in a copy. We're offering a substantial discount off of our introductory price through the end of August.

Our restoration ended up with a wingspan of 7 feet. We'll be debuting the crested male specimen in a few weeks, so keep tuned for updates. Also come to the museum to see this specimen now proudly on display in out exhibit hall.
Posted by Maltese at 8:32 AM 1 comment: 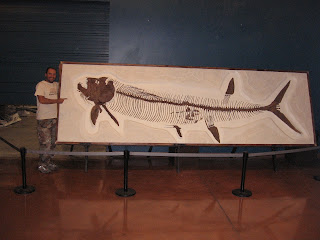 Ok, maybe not so pretty because I've volunteered myself to be the RMDRC spokesmodel. Just consider yourself lucky I didn't accessorize with a bikini.
Posted by Maltese at 2:04 PM No comments:

Building a Xiphactinus: ground to mount

During the 2010 field season, we managed to find and collect part or most of 9 Xiphactinus audax specimens. But what do you do with all of those mainly incomplete fish? In the case with RMDRC 10-025, we decided to prepare and restore the skeleton in a panel mount display. Two factors helped us decide on working with this specimen: It was relatively complete except for the skull, which had weathered out in the float, and it looked to be a pretty small sized fish, possibly only 10 feet long. After all, it was excavated in a fishpile only 7 feet square.

Since most of the skull was in golf ball sized fragments with eroded edges, we decided to source an already prepared Xiphactinus skull of the same size that was collected on the same ranch a few years prior. Preparation went slowly because of extensive root invasion, resulting in some of the most maddeningly soft fish bone we've ever had the joy of preparing.

Laying out the critter we found that we grossly underestimated the final size of our animal. From tail tip to procumbent fang it comes in at a whopping 13 feet 4 inches, with the beautiful tail fin 3 1/2 feet tall. Interestingly, there was bits of a Gillicus skull, pectoral fins and vertebral column mixed in with the Xiphactinus, more than likely the remains of its last meal. We included the Gillicus in the mount, because, why not?

No matter, we can make these panel mounts as large as we need. Our last mount was made of steel, plywood and solid Hydrocal, resulting in a 1600 pound monstrosity. This slightly smaller mount is using new techniques, with a finished target weight of below 400 pounds. Fingers crossed, chiropractor on call.
We aim on finishing towards the end of this week. Hopefully. It's amazing how much lab space this thing takes up!
Posted by Maltese at 10:51 AM No comments: