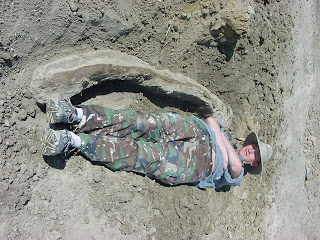 This past week I was attending the 8th Conference on Fossil Resources in St. George, UT. The second group of talks all focused on the Campanian aged flora and fauna of the western interior. A few brief mentions of the poor neglected duckbill dinosaur fauna were made, but I wanted to share with you an image of one that I'd love to find: "The duckbill that ate Manhattan!" Paleo Tech Jacob Jett (6'4" tall, shown back in his younger days) is shown for scale.
This isolated rib bone was discovered in the upper Judith River Formation (Campanian aged) in the summer of 2004 while excavating a centrosaurine horned dinosaur called "UTC". Isolated duckbill skeletal remains are not uncommon at dig sites. In fact, juvenile hadrosaur jaws have been found at both our  "Joyce" and "Pete 3" sites in the same area.
Unfortunately, isolated postcranial remains on hadrosaurs aren't very diagnostic, so it is impossible to say which critter this rib belongs to. It is a good deal longer than our longest rib on "Big Ed", the 34 foot long Edmontosaurus annectens that is now on display in Korea. I'd estimate the body length of this duckbill to be at least 40 feet.
Posted by Maltese at 7:16 AM No comments: 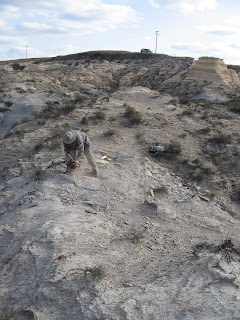 In honor of this week's late update, I present to you "Holly" RMDRC 09-007, a pterosaur from the lower Niobrara Chalk of western Kansas. It's only fitting, since the excavation of this specimen is the reason this week's update was so late. confirmation of the genus waits on further prep work, though we have a pretty good idea what it is.
I discovered this specimen Monday morning while scouting on a private ranch. Excavation took about a day, and the entire specimen (including the rarely preserved skull) is back in our lab now. The blocks contain most of the body and wings as well as the rear portion of the lower jaws. Preparation will commence as soon as I get back from a small spurt of paleo conferences over the next few weeks.
Pterosaur remains are not uncommon  in the Niobrara, even though our dig sites are several hundred miles away from the nearest shore. Pterosaurs were strong flyers, and appeared to spend quite a lot of time hunting over the open ocean. The males had elaborate crests, most likely to attract females, just like their very distant cousins today!
Posted by Maltese at 9:21 AM No comments: 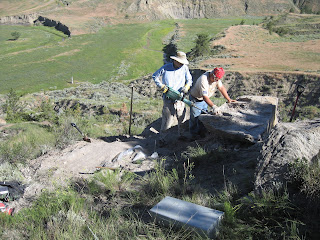 For this week's dinosaur, we venture up to Montana and the Judith River Formation, 75 million years ago in the late Cretaceous. Larry, a rancher who loves to hunt for dinosaurs near his home, was exploring badlands with Dr. Kraig Derstler during the summer of 2007. He had just finished wagering Kraig the princely sum of 2 quarters that he could find a diggable dinosaur fossil first when he came across hadrosaur bone fragments weathering out of a very steep slope. A bit of excavation revealed a few bones clustered together, luckily a RMDRC field crew was already en route to Montana, and we would spend the next month at the site.
In the photo, Dr. Kraig Derstler and Paleo Tech Jacob Jett work on breaking up a large sandstone block above the dinosaur (under the white cloth near their feet). Small man-portable jackhammers help tremendously with digs like this.
Most of Joyce (Named after Larry's wife, whoever finds the dinosaur gets to name it) was buried fairly quickly, with only a few shed tyrannosaur teeth in the quarry indicating limited scavenging activity. Unfortunately, not long after Joyce was buried, a small creek had cut through the site removing most of the tail. Somehow knowing it had been missing for 75 million years made us feel a bit better. From the limbs, vertebrae and skull were were able to tell that it was a lambeosaurine duckbill dinosaur, one of the types with a head crest. The pile of bones was so extensive that we had to remove most of it in one large jacket, and slide it up nearly 50 feet of slope to load on a trailer. Preparation is ongoing, and we hope to have some bones on display in the coming months.
Joyce made her television debut in 2007 as well, with NBC Nightly News and ABC (Australia) both having camera crews visit us at the dig site.
Posted by Maltese at 8:56 AM No comments: