It's starting to feel a lot like springtime, which for us usually means trips to western Kansas to our Niobrara chalk localities. We haven't made it out yet (still waiting on that first downpour to wash the winter fluff off of the rocks... it may be a while with this drought) so instead I'll write a bit about a mosasaur that is near and dear to me.

RMDRC 06-009 "Cap'n Chuck" was the first mosasaur I ever found. It's a specimen of Platecarpus "ictericus" (sorry Takuya, haven't made the species switch yet) from the upper chalk of Logan County, about 83 million years old. I spotted a single dorsal vertebra sticking out of a vertical gully wall, about 12 feet above the gully bottom. Don't ask what I was doing looking up there. My boss, Mike, loaded Jacob and I into the bucket of the bobcat and lifted us up to see if there was anything else there besides the single vertebra. Yep! we discovered the back of the skull, but since it was late October and in the low 50s (with drizzle coming in and lots of wind) we decided to secure the site till the next spring.


In April of 2007 we returned, with a fancy new mini jackhammer that Mike had bought over the winter. Holy moly that thing saved us a lot of time.


It turns out field mapping in the chalk is kind of a tough thing to do. The chalk gets all over everything and generally makes life miserable. It's best to save it for the lab. The skeleton was preserved very well, missing the end of the tail. Quick measurements of elements give us a total length of about 23 feet, which is pretty dang big for a Platecarpus.

Once show-prepped in the lab it was decided that Cap'n Chuck was complete enough to restore in 3d (most exploded skulls are good candidates, there's less crushing distortion). That meant pulling every individual bone out of the jacket and cleaning it completely. This enabled us to get a good look at some rare parts like the interclavicle and ear cartilages. Hopefully we'll be able to start restoration sooner or later!

Yep we all have them. In addition to the decades of prep backlog of big, complete and interesting specimens there is always that nagging pile of individual bones and small specimens that gets collected then sits as priority number 12 on the shelf. Sometimes it's a good organizational effort (and therapy) to get these things knocked off the to-do list. Plus it frees up a bit of space for the next season's collecting efforts (which should begin any week now, hopefully.

This past summer during beer week in Montana I found a small shard of tyrannosaur tooth sticking out of a lag deposit. I suggested to one of our guests, Terri, that she could spend some time excavating it. Turns out she discovered that the tooth was still connected to a chunk of jaw. Unfortunately digging it out was a bit of a chore since the sandstone got really hard really quickly. It did clean up nicely though, and will be going on display sometime today.

Some progress is being made on Pete III, our challenging Daspletosaurus torosus, also from Montana. This huge 70 pound monstrosity of a jacket contained just one spindly rib. That and lots of sandstone. Whatever, it's off the shelf now and nearly in the clean room.

We're not all about preparing partial dinosaur bones though. This Pteranodon sternbergi metacarpal was pulled from the lower chalk in western Kansas a few years back. Should have been prepared years ago. 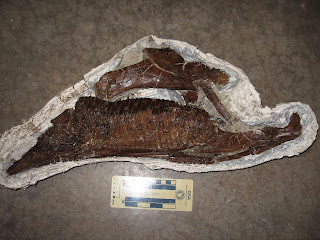 This week we've had a chance to begin work on the skull material recovered from RMRDRC 07-020 "Joyce", from the upper Judith River Formation of Fergus County, Montana. The material is typical for the Judith river... SOFT. We've begun utilizing the technique that I wrote about for the first FPCS at Petrified Forest National Park, in stabilizing he matrix and bone with low-strength adhesive (PB 4417) before air abrading the material. The results are great! I'd like to share a few pics of the first jacket we have prepared, and if anyone wants to take a well educated stab at the identity of the lambeosaurine, have at it! 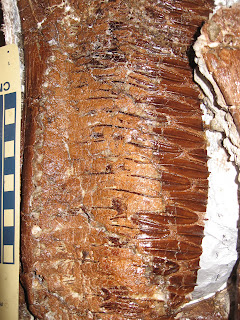 Present is the right dentary in lingual view, as well as a quadrate and partial quadratojugal. 31 rows of teeth are present in this dental battery. 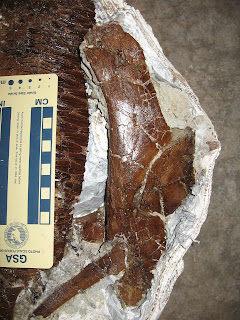