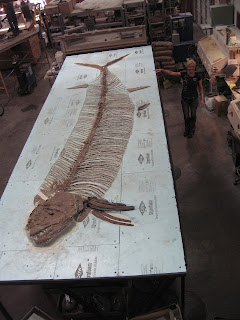 Jacob and Lisa keep plugging along on the gigantic mount of the huge 18 1/2 foot long Xiphactinus audax "Mildred". Basic assembly except for the fins are now finished, hopefully soon we will be able to rotate the mount to its upright position, working on a 5 foot high table is not exactly fun.
Posted by Maltese at 3:40 PM 3 comments:

Infected tails do it better

Sometimes you work on a fossil and just think "oooh, that had to hurt". This tail from a pretty large Clidastes from the upper Niobrara chalk is fairly boring when viewed from afar. Up close though something just doesn't look right.

Of the 45 bones, 23 are pathological, with 17 of them fused at the centrum in 5 separate masses. All of these bones lack transverse processes, so they come from the lower lobe of Clidastes' bifurcated tail fin: a bit of dangling flesh that might make for a tasty morsel for a predator.

The bones, though mostly healed, show bone growth consistent with a long infection. As the tail was the primary means of locomotion/propulsion for mosasaurs, this injury must have been very painful for a very long time for this mosasaur.

Posted by Maltese at 3:31 PM No comments: