If you're following me on the twitters I'm sure you all know about my absolute and undying love for the giant ugly predatory fish from Kansas, Xiphactinus audax. We spend a lot of time in normal years in Kansas during the spring and fall (when the weather and bugs aren't too miserable) and we tend to find a good number of at least partial skeletons, some exceeding 18 feet in length.

Xiphactinus is well know for its gluttony. The famous "Fish Within a Fish" at the Sternberg Museum of Natural History, where a 13 foot long Xiphactinus semi-successfully ingested a nearly 6 foot long Gillicus is a prime example of this. I claim it to be semi-successful as the Gillicus is completely articulated and not digested, indicating that trying to swallow this meal likely killed the Xiphactinus. Other times smaller remains of a fishy meal in the body cavity of a Xiphactinus are found, we see this in a little less than half of our specimens.

Fast forward to the spring of 2018. I was scouting the lower Niobrara Chalk in Gove County, Kansas. The chalk is defined stratigraphically by 23 distinctive easily traced (usually) bentonite layers laid out by Hattin in his 1982 work. These outcrops were around Hattin's Marker Unit 6, so the upper limit of where I could possibly find my dream fish , an articulated specimen of the ram-snouted Martinichthys ziphoides. No luck on that front however I did find this fine pile of bone eroding out, seemingly face-first. A small pile of bones is always a good sign!

Unfortunately it looked like it was headed into the base of a big cliff. After initial evaluation, we decided to GPS and cover up the site to protect it until we could come back at a later date. That date came the next spring.After a long morning of removing overbruden, we were relieved to see the fish had actually folded in half back on itself about 4 feet from the erosional edge and the balk half pointed back out that direction. We didn't have a tail fin, but we also didn't have to move a mountain of rock chasing this Xiphactinus either. I gave it the nickname "Ashley" after one of my trivia teammates (remember when we could go to bars and do that? Wear a mask and maybe we can soon).

One of the strange things we noticed while exposing the bones in the field was a large bulky bone near the belly. It looked like a cliethrum, one of the bones that the pectoral fin hangs off of. The skeleton itself was mildly disarticulated in parts, and any Xiphactinus will have 2 of them, so maybe this was just a bit of Ashley that was pulled off the carcass when scavengers like the shark Squalicorax came to strip off all the flesh.

Preparation showed the skeleton was in much better condition than we had imagines, with decent articulation and a beautiful pelvic fin. It also showed both cliethra that were supposed to be present on a Xiphactinus wee in fact there in place. So what does that mean with our now THIRD cliethrum? 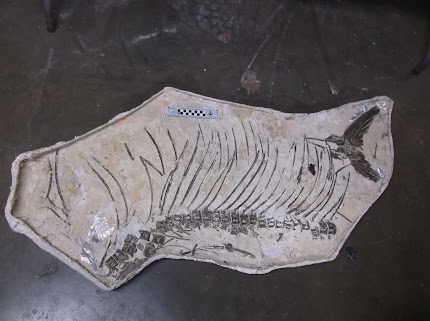 One way to be sure is to prepare it as well. Free from all of its matrix two things were readily apparent: One: the acid-etched texture of the surface of the bone meaning it was stomach contents and Two: based on the shape, it also belonged to Xiphactinus.

With that shocking knowledge in hand with al of the bad things Xiphactinus could be (common, boring ugly, a lot of work to dig up and prepare) we can also add cannibalism to that ever growing list.