Mosasaurs in Kansas, no big deal, there are thousands of specimens known. But what about the actual genus "Mosasaurus"? As recently as 1967, Dale Russell's excellent mosasaur book claimed "Mosasaurus ivoensis" was present in the Niobrara. Since then, Johan Lindgren has moved the holotype of that species (from Sweden) into Tylosaurus. The lone Kansas specimen originally described by Williston in 1902 looks to be attributable (to my eye) to existing known Niobrara mosasaurs, most likely Platecarpus and Clidastes.With the loss of the one possible chalk specimen we're left with a sort of sad thought: Mosasaurus didn't exist in Kansas.

This spring a TPI field crew accompanied by famed Kansas Cretaceous expert Mike Everhart came out to Wallace County in far western Kansas at the request of a private landowner. We were investigating a report of a mosasaur eroding out of the Weskan member of the Pierre Shale, immediately above the much better known Sharon Springs member. Hardly any people work on collecting fossils out of the Weskan, so we were excited for this opportunity in virtually unexplored country. The critter, RMDRC 14-015, got the nickname "Wally" after Wallace County, and was brought back to the lab this spring.

After recovery and prep it was obvious we were dealing with a pretty darn big mosasaur with a skull about 4 feet long, but what could it be? The only reported specimens this size out of the Pierre in Kansas could be Tylosaurus or Globidens. Prognathodon crassartus from "Eagle Tail, Kansas (now known as Sharon Springs) turned out to just be Plioplatecarpus. the premaxilla lacked a substantial rostrum so that excludes Tylosaurus, though its slight nub of one also excludes Prognathodon (known from other Pierre deposits). The teeth are all sharp and pointy, so not Globidens (yes they are pointy in juvenile Globidens, but with a 4 foot long head, it's silly to consider this critter a juvenile). In the end, with the characters we saw, there was only one logical conclusion.
Yes Virginia, there really is Mosasaurus in Kansas.
In fact now there are two: We started recovery of another even larger and more massive specimen from the same ranch at the end of October, RMDRC 14-050. More on that this spring when we return to finish the site. The coolest thing is how the specimens display both advanced and primitive features usually assigned to one or another species of Mosasaurus, but not all in one. It's probably a brand new species, which is really exciting for us. 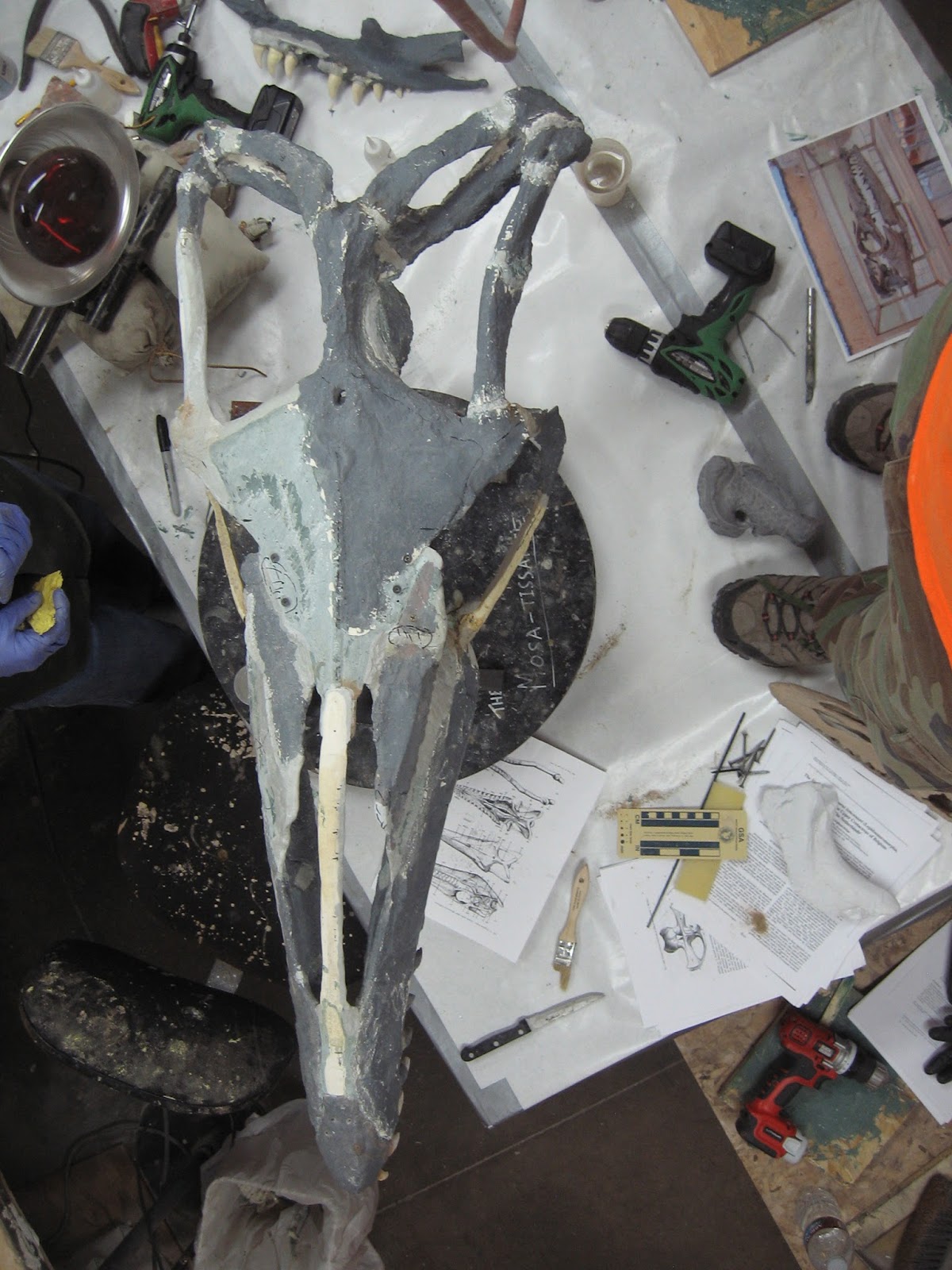 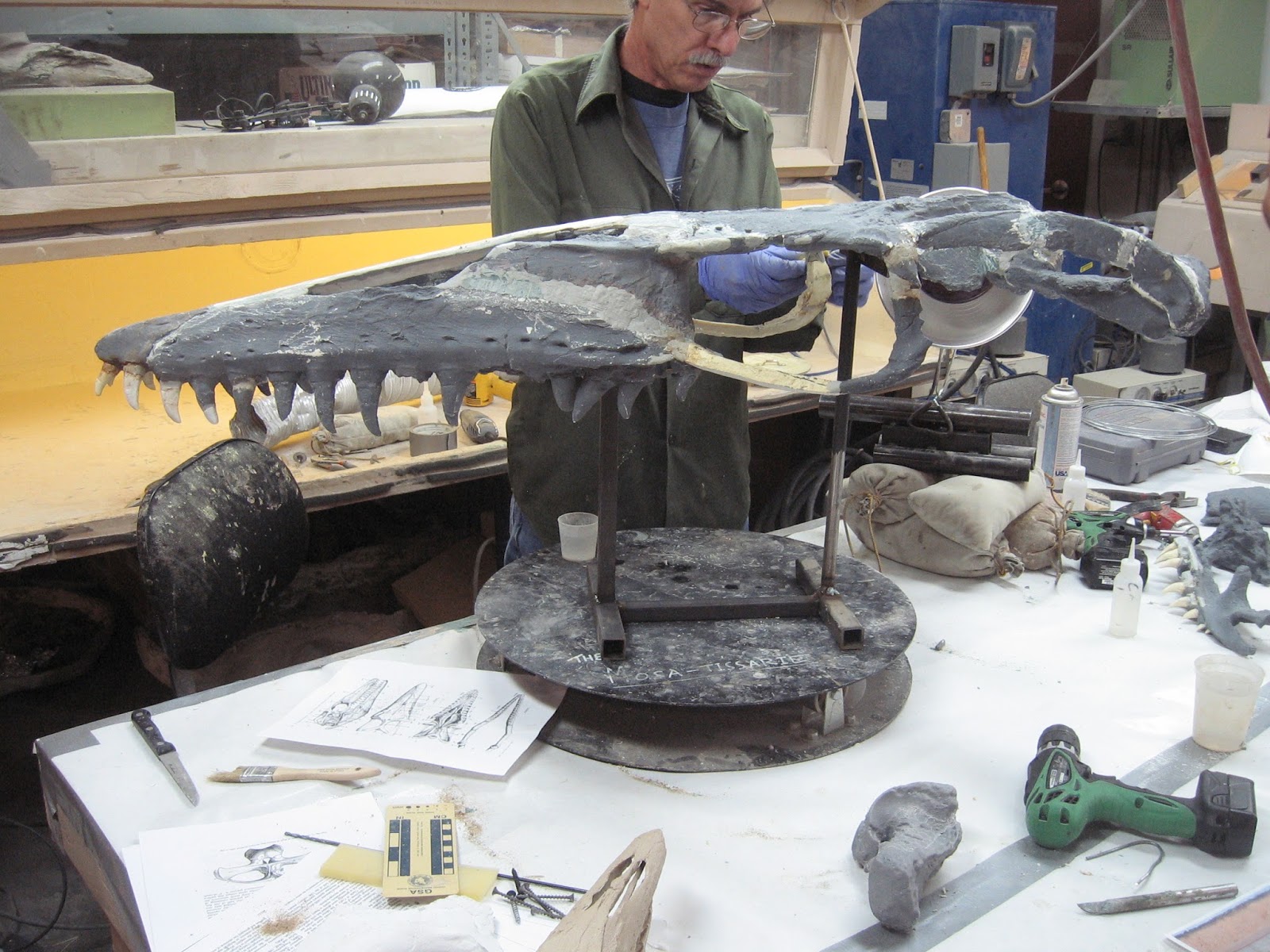 We are currently restoring and molding the complete skull of RMDRC 14-015 for debut at the Tucson Gem and Mineral show this January, in fact the palate it being installed as I type. The rest of the specimen may take a bit longer to restore, but the world always needs more 30 foot long water lizards. And you can quote me on that.