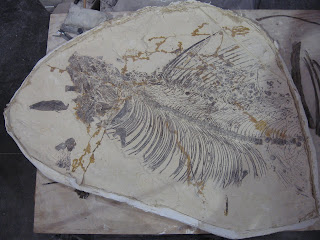 The RMDRC has a new articulated specimen (photo above) recovered this year off of private land. The skull is to the left, with the sail fin taking most of the upper half of the large jacket. This one is much larger (over 5 feet long), more complete, and better preserved than the new Denver specimen. It has been "show prepped" to a plaque stage, and will be molded as is. This will get the fish ready for 3d reconstruction using casts of the original bones.
Posted by Maltese at 8:38 AM