I'm a little late to the party, but I wanted to share this link: http://uwgeomuseumrenovations.blogspot.com/2012/05/updates-on-renovations-happening-at-uw.html

A few years back, a crew from TPI took down the Apatosaurus skeleton from the University of Wyoming Geological Museum, reprepared and stabilized the bones, then remounted the skeleton in a more modern (non tail-dragging) pose. Recently the museum has been slated for renovations/asbestos abatement so I was sent up to help Dr. Kelli Trujillo and Bill Turner remove the tail (and a Pteranodon cast, and also an Allosaurus, at least in part) from display so work on the museum could commence. 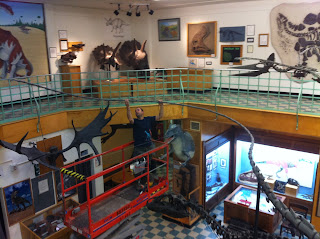 The tail will be back on display later this year, just in case anyone is concerned. It should be viewed as a minor miracle that I actually made it that far up on a scissor lift. I don't do heights well. You can see a complete cast of this Apatosaurus on display at the RMDRC.
Posted by Maltese at 7:58 AM